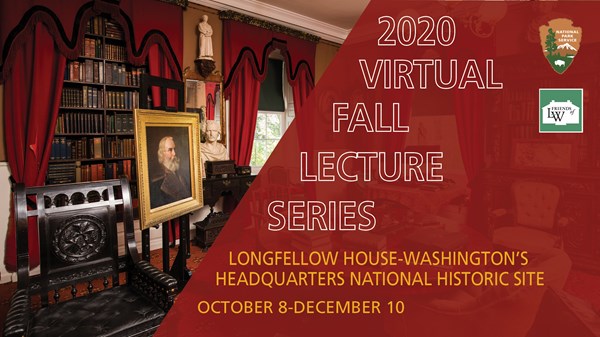 The National Park Service and the Friends of the Longfellow House-Washington’s Headquarters are pleased to announce the 2020 Virtual Fall Lecture Series, held live online starting October 8. This year’s series examines histories of social change through the lens of activism, politics, and the arts.

Henry Wadsworth Longfellow’s home was a place of literary, artistic, and intellectual gathering in the 19th century. Today we honor this history by bringing community members together in conversation with historians, poets, and artists.

All programs will take place Thursdays from 7:00 to 8:00 PM ET unless otherwise noted. They are all free and open to the public. Register here (for one or more events) to receive the event link.
Thursday, October 8, 7:00
“Activism Begins at Home”: Putting the Cambridge Suffrage Movement in Conversation with the History of Women's Suffrage
Traditional suffrage histories have focused on the stories of a few iconic leaders, but there is a more diverse suffrage history waiting to be told. Join feminist historian and biographer Susan Ware, author of Why They Marched: Untold Stories of the Women Who Fought for the Right to Vote, to learn how this new history highlights those who made women's suffrage happen across the nation.

Tuesday, October 18, 3:00
Translating Migrations as Poetic Act
Rajiv Mohabir will discuss the life of the indenture trade in the Western hemisphere and how this labor history has affected concepts of home and belonging. In these multiple migrations and histories India connects with Guyana, Trinidad, Salem, New York, and Florida. Through a poetic journey mooring the only firsthand account of indentured labor from the Anglophone Caribbean to his current practice he will show how survival and resistance emerge in a poetry of naming the unnameable.

Thursday, October 29, 7:00
“The Factory of Genocide”: Carcerality and Confinement on Boston Harbor’s Deer Island
This talk by Harvard PhD candidate Mary McNeil traces the evolution of carceral regimes in Massachusetts to theorize overlapping Black and Native geographies and histories that are inscribed upon Deer Island. She’ll discuss three flashpoints in the island’s history: the internment of “Praying Indians” in the winter of 1675-1676, the development of modern penal institutions on the island in the late 19th century, and the acceleration of political organizing by individuals incarcerated in Massachusetts in the early 1970s.

Thursday, November 5, 7:00
Female Husbands and the Expansion of Policing in the 19th Century
On the eve of war over slavery, Northern elites, reformers, and the police who worked for them viewed transing gender as one of many threats to the social order. Join Jen Manion, author of Female Husbands: A Trans History, for a discussion of the ways female husbands and others who transed gender for work, life, or freedom were subject to increased scrutiny, interrogation, and arrest in the mid to late 19th century.

Thursday, November 12, 7:00
George Washington, Councils of War, and the Formation of the President’s Cabinet
The cabinet isn't in the Constitution, yet every president has worked with a cabinet. So where did it come from? Join Dr. Lindsay Chervinsky, author of The Cabinet: George Washington and the Creation of an American Institution, to learn about the origins of the president's cabinet, the importance of the councils of war during the American Revolution, and the role of Longfellow House in this story!

Thursday, November 19, 7:00
The Slave Narrative of Willie Mae
Professional artist and activist Ifé Franklin invites members of the community to a reading of her book The Slave Narrative of Willie Mae. Written in the voice of Franklin’s great-grandmother, Willie Mae McCain, who was born in Virginia on the threshold of emancipation, this narrative brings to life Willie Mae's journey from enslavement to freedom. This book is in the collection of the National Museum of African American History and Culture.

Thursday, December 3, 7:00
Photography, Slavery, Agency
Shortly after the 1839 invention of photography, this new medium was embraced by the proslavery cause, while it opened up new ways for enslaved people to resist bondage. Louis Agassiz sought to use daguerreotypes of enslaved people to support theories of scientific racism. At the same time, some enslaved people were able to acquire their own photographs, which they used to resist the internal slave trade. Join Ilisa Barbash (co-editor/co-author) and Matthew Fox Amato (co-author) as they discuss these phenomena outlined in the new book, To Make Their Own Way in the World: The Enduring Legacy of the Zealy Daguerreotypes.