A Look at Life in the Longfellow House (#4) 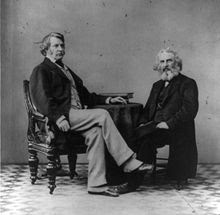 Sen. Charles Sumner died on March 11, 1874, at the age of sixty-three. His great friend Henry W. Longfellow began to write a poem in tribute to the civil-rights champion on March 30, but the lines did not come easily. On April 2, Longfellow put in his diary: “I have been trying to write something about Sumner, but to little purpose. I cannot collect my faculties.”

Longfellow’s poem finally appeared in the January 1875 issue of The Atlantic Monthly:

Garlands upon his grave
And flowers upon his hearse,
And to the tender heart and brave
The tribute of this verse.

His was the troubled life,
The conflict and the pain,
The grief, the bitterness of strife,
The honor without stain.

Like Winkelried, he took
Into his manly breast
The sheaf of hostile spears, and broke
A path for the oppressed.

Then from the fatal field
Upon a nation’s heart
Borne like a warrior on his shield!—
So should the brave depart.

Death takes us by surprise,
And stays our hurrying feet;
The great design unfinished lies,
Our lives are incomplete.

But in the dark unknown
Perfect their circles seem,
Even as a bridge’s arch of stone
Is rounded in the stream.

Alike are life and death,
When life in death survives,
And the uninterrupted breath
Inspires a thousand lives.

Were a star quenched on high,
For ages would its light,
Still travelling downward from the sky,
Shine on our mortal sight.

So when a great man dies,
For years beyond our ken,
The light he leaves behind him lies
Upon the paths of men.

This year is Charles Sumner’s bicentennial. The staff of Longfellow House–Washington’s Headquarters National Historic Site and other National Park Service sites are co-sponsoring several events in greater Boston to commemorate the senator’s life. Please join us at the Friends’ annual gathering at Mount Auburn Cemetery, this year on February 26, to hear Prof. John Stauffer speak of the friendship between the senator and the poet.