Enjoy this welcome video created by the National Park Service. 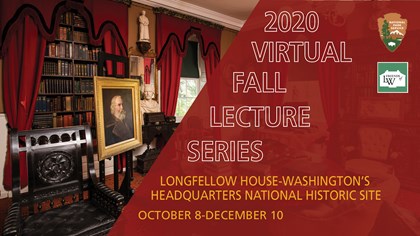 The National Park Service and the Friends of the Longfellow House-Washington’s Headquarters are pleased to announce the 2020 Virtual Fall Lecture Series, held live online starting October 8. Go to “News & Events” or click the box above to learn more.

The Longfellow House was built in 1759 by John Vassall, a wealthy royalist. In 1774, he and his family hastily abandoned their estate and fled to British protection in Boston on the eve of the Revolutionary War. Starting in July 1775, George Washington used the house as his headquarters for almost nine months during the siege of Boston. During this time he was visited by Benjamin Franklin, John Adams, John Hancock, and other revolutionary leaders.

In 1791 the house was purchased by Andrew Craigie, the Apothecary General during the revolutionary war. He added the side porches and extended the back of the house. He and his young wife, Elizabeth, became known for their parties. When Andrew died, he was deeply in debt, and Elizabeth had to turn her home into a boarding-house.

Henry Wadsworth Longfellow, the renowned American poet, occupied the house from 1837 to 1882. At first, when he was a professor of languages at Harvard College, he rented rooms in the house. In 1843 he married Frances (“Fanny”) Appleton, and her wealthy father bought the house for them as a wedding present. Fanny wrote to her brother about the house: “...we are full of plans & projects with no desire, however, to change a feature of the old countenance which Washington has rendered sacred.”

The house was a favorite gathering place for many prominent philosophers and writers, including Ralph Waldo Emerson, Nathaniel Hawthorne, and Charles Dickens. Longfellow’s descendants preserved the house and the poet’s furnishings and collections until 1962, when they presented them to the nation. The Longfellow House–Washington’s Headquarters National Historic Site is now maintained by the National Park Service.

Downstairs the house is much as it was in Longfellow’s time and offers an exceptional glimpse of intellectual life in the 19th century. Yet we can also imagine the 18th-century visitors to the house, conferring with General Washington in his office. The collections, extensive archives, and historic grounds make this house a unique repository of American history.